The Street Laced Team was once again front and center for the historic season that the Tampa Bay Lightning just completed, having secured back-to-back titles for the first time in franchise history! This is the Lightning’s third Stanley Cup Championship, having also won the coveted title back on 2004, but for this to be the second straight year battling for Lord Stanley, you know the Lightning organization had to really take things up a notch, especially in a post-pandemic world!

The Street Laced crew was on-hand from the very beginning of Round 1, as Greg Wolf (VP of Street Laced, now in his 14th season as In-Game Host for the team) and the Street Laced DJ’s squad were the catalysts for all entertainment from the moment fans stepped foot onto Amalie Arena grounds, to the experience fans received inside the stadium, Street Laced had it’s finger on the pulse of ALL of it.

Our DJ crew entertained fans outside on Ford Thunder Alley for ALL rounds, including the Cup Final, as well as all watch parties when the team was on the road. Greg Wolf was privy to introduce a slew of celebrities and athletes over the playoff run, who helped fire up fans during the game, including the likes of Poison front-man Bret Michaels and Hollywood icon, John Travolta, to name a few! Of course, it wouldn’t be “CHAMPA BAY” unless there were also a ton of Tampa Bay Buccaneer sightings, including Gronk, OJ Howard, Vita Vea, Cameron Brate and others!

The Street Laced Entertainment team was also on-hand for all drive-thru pep rallies, as well as each game night, wowing fans with our LED Lightning Robots and Lyrian Dancers, Human Statues, Bucket Drummers and more! No matter where you turned, the Street Laced team was there. And the celebration wouldn’t be completed without the entire City of Tampa coming together for another Boat Parade up the Hillsborough River, with our Street Laced DJ’s crew mixing LIVE on boats and in Julian B. Lane Park for the Champions Celebration!

We could not be more proud of the Lightning and our Street Laced crew for putting on the best show in the entire National Hockey League and now, we can’t wait to go for the THREE-PEAT!!! #WeDontPlayWeJustWin 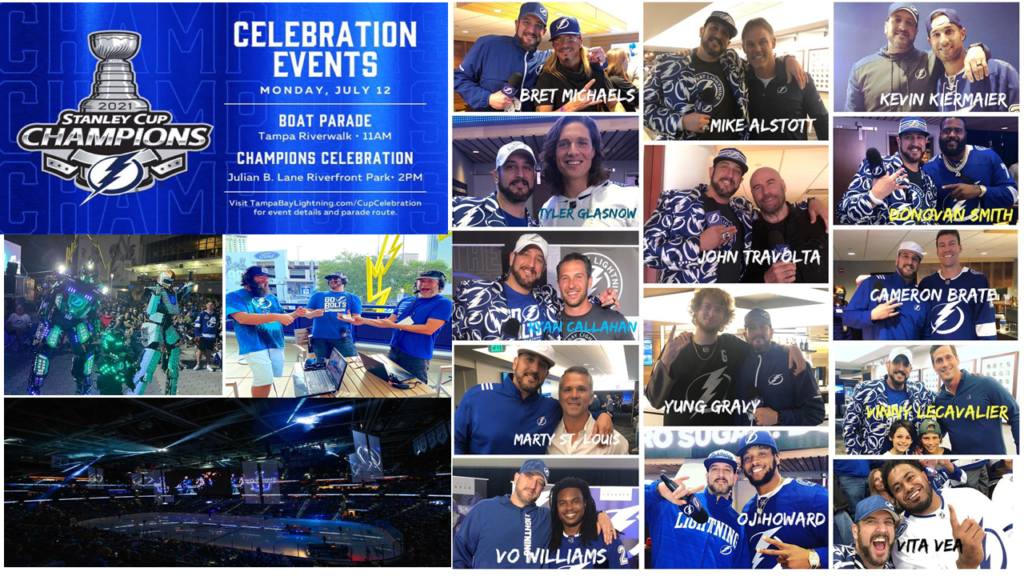