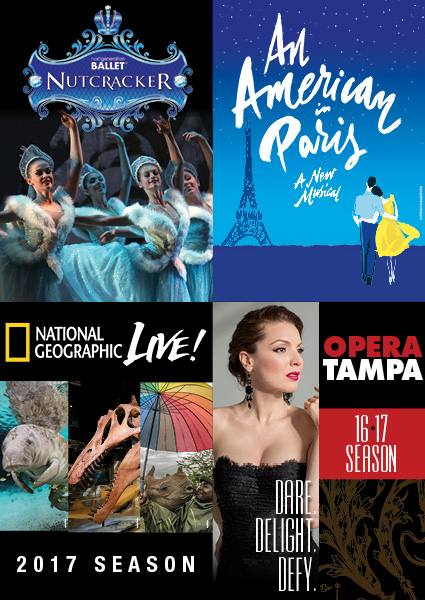 If there is one thing you can count on this year, it’s that the Straz Center will surely knock your socks off with their award winning shows, Broadway specials Opera Tampa happenings and educational events.

An American in Paris in the new Tony Award®-winning musical about an American soldier, a mysterious French girl and an indomitable European city, each yearning for a new beginning in the aftermath of war. Acclaimed director/choreographer and 2015 Tony Award® winner Christopher Wheeldon brings the magic and romance of Paris into the perfect harmony with unforgettable songs from George and Ira Gershwin in the show that earned more awards than any other musical in the 2014-15 season!
The New York Times raves “An American in Paris is a triumph! Pure joy!” and the Wall Street Journal declares, “Once you’ve seen it, you’ll find it hard to settle for less ever again.” Don’t miss this stunning Broadway hit when it arrives in Tampa on its first national tour!

The Straz Center will host a plethora of Opera shows for the 2016-2017 season, starting tomorrow, October 21st with Opera Tampa Singers at Donatello Italian Restaurant. That’s right, the show hits the road, and the cost is FREE! To get a rundown of ALL Opera events this season, visit: http://www.strazcenter.org/OperaTampa/Schedule-of-Events

National Geographic Live returns to Tampa for another season of incredible events! Get your tickets today to hear real life explorers LIVE on stage as they share their unforgettable stories and breathtaking images! On January 17th, Ocean Wild: The Lights Beneath the Seas arrives and dives into Brian Skerry’s images that illuminate the vast, hidden world beneath the waves. Brian has spent more than 10,000 hours underwater using his camera to tell the story of some of the ocean’s most elusive inhabitants. Join him for an intimate look at dolphin intelligence, enigmatic manatees and what it was like to capture the first photos of Atlantic bluefin tuna in the wild. Spinosaurus: Lost Giant of the Cretaceous is another spectacular show on the horizon on February 21st, 2017! Discovered more than half a century ago in Morocco by the German paleontologist Ernst Stromer, Spinosaurus’s fossil remains were lost in the Allied bombing of Germany during World War II. With the help of recent fossil discoveries and Stromer’s own data and drawings, contemporary scientists including German/Moroccan paleontologist and National Geographic Emerging Explorer Nizar Ibrahim have reconstructed the lost world of the Cretaceous-era Sahara. Ibrahim tells the story of Spinosaurus’s discovery, loss and rediscovery, and explains what – other than its size – makes this ancient monster unique! And finally, on March 28th Rhinos, Rickshaws, and Revolutions: My Search for Truth arrives at the Straz. Since beginning her career covering such stories as the conflict in Kosovo and the disputed Pakistan-India border, photojournalist Ami Vitale let one principle guide her work: live the story. She’s gone to tremendous lengths to capture the power of the human spirit even in the face of adversity, including living in mud huts and braving civil war in Guinea-Bissau. Eventually, another philosophy emerged: talking about humanity means talking about nature. Thus, she chronicles her journey from documenting warzones to helping to reintroduce rhinos to the wild and donning a panda costume to remain anonymous among the giant mammals.

Get your tickets for ANY of these spectacular shows NOW by visiting the Box Office: http://www.strazcenter.org/Tickets-Events