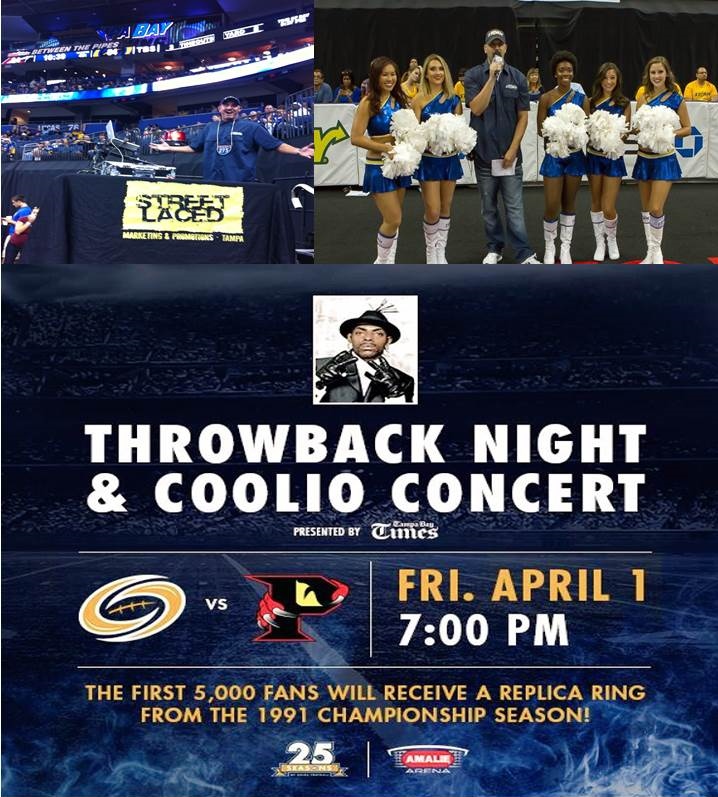 Street Laced’s own dynamic duo of Greg Wolf (In-Game Host) and DJ Mingle Mixx (In-Game DJ) return for the 25th Anniversary Season of Tampa Bay Storm Football! The two have been providing the in-game entertainment for the Storm for the past 5 seasons.  The “War on I-4” kicks off the season tomorrow night (April 1st) as the Storm battle their in-state rivals, the Orlando Predators at Amalie Arena at 7:00pm. It’s Throwback Night too, celebrating the Storm’s 1991 ArenaBowl Championship including throwback uniforms and the first 5000 fans in attendance receiving replica championship rings! There will also be a slew of food and beverage specials and a post-game concert with Grammy Award winning artist, Coolio!

His first studio album, It Takes a Thief, contained his breakout hit “Fantastic Voyage.”  The song would reach number three on The Billboard Hot 100 and go on to sell over a million copies, earning it a platinum certification.

Coolio would follow-up his initial success with the chart-topping hit, “Gangsta’s Paradise.”  The song, written for the film Dangerous Minds, was Coolio’s most successful single.  It would go on to reach number one on the Billboard Hot 100, selling over six million copies, making it Billboard Magazine’s number one single of 1995.  “Gangsta’s Paradise” won a Grammy Award for Best Rap Solo Performance and was nominated for Record of the Year.  He would go on to sell over 17 million records worldwide.

To purchase tickets to the game or any of the games this season, visit: http://www.tampabaystorm.com/tickets/single-game-tickets