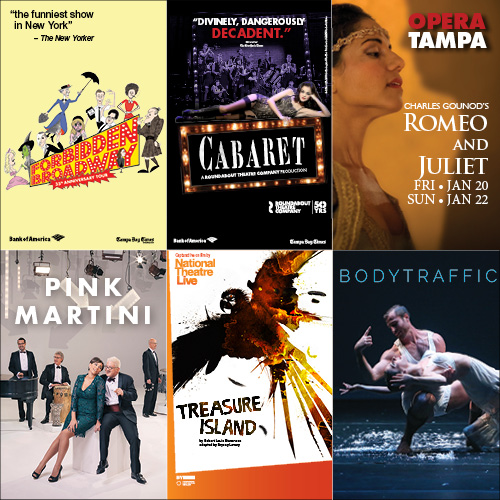 Forbidden Broadway (Jan 10-Mar 12) is the longest-running musical revue in the world and “the funniest show in New York” (New Yorker Magazine). A favorite of all Broadway lovers, this cabaret revue sharply spoofs show tunes, characters and plots of contemporary and classic Broadway musicals, and it will have audiences rolling in the aisles. The original version of the revue opened in New York in 1982 and ran for more than 2,300 performances. Presented in the intimate Jaeb Theater and unlike anything seen at The Straz before, this version of Forbidden Broadway has been reincarnated and modernized to include parodies of newer shows. DETAILS: FORBIDDEN

Caberet (Jan 24-29): Direct from Broadway, the acclaimed masterpiece returns to Tampa! As part of their 50th Anniversary Season, the critically acclaimed and award-winning Roundabout Theatre Company is proud to present SAM MENDES (Skyfall, American Beauty) and ROB MARSHALL’S (Into the Woods and Chicago, the films) Tony Award®-winning production of CABARET.

Come hear some of the most memorable songs in theatre history, including “Cabaret,” “Willkommen” and “Maybe This Time.” Leave your troubles outside – life is beautiful at CABARET, JOHN KANDER, FRED EBB and JOE MASTEROFF’s Tony-winning musical about following your heart while the world loses its way.

MATURE – CABARET is intended only for mature audiences. As tastes and sensitivities vary greatly from person to person, if you have specific concerns or questions about content or age-appropriateness, we encourage you to write us at comments@strazcenter.org before making your purchase. DETAILS: CABERET

Romeo & Juliet (Jan 20-22): Shakespeare’s star-crossed lovers find themselves trapped in the deadly Montague-Capulet family feud. Defying family honor, they choose each other, taking their lives into their own hands. In this daring dance with fate, Romeo and Juliet seal their future in a secret marriage before everything takes a turn for the worse. Verona may be fair, but life isn’t. Gounod’s dark, intense music meets a masterful libretto true to the Bard’s first telling of this spellbinding tale of young love undone by foolish family pride. Romeo and Juliet is sung in French with English translations projected above the stage. DETAILS: ROMEO

Pink Martini (Jan 21) distills its global inspiration for music into a 12+ piece band that makes any evening with them a tipsy, head-spinning, ’round-the-world adventure. Enjoy the intoxicating wonders of their sparkling melodies mixed with a spirited percussion section, all balanced by the heady charms of their lead vocalist, China Forbes.

National Theatre Live! Treasure Island (Jan 15): It is a dark and stormy night at the inn. A stranger with a sea-chest stuffed with secrets arrives. So begins young Jim Hawkins’s swashbuckling adventure with a cast of legendary characters including “Long John” Silver. Robert Louis Stevenson’s thrilling tale of murder, money and mutiny is brought to life in this new stage adaptation by Bryony Lavery, broadcast live from the National Theatre. DETAILS: TREASURE

BodyTraffic (Feb 22): Named one of Dance Magazine’s “25 to Watch,” BODYTRAFFIC has skyrocketed to international acclaim. Born from the sheer love of dance, BODYTRAFFIC’s spirited confidence reflects the fast-paced, freeway world of its Los Angeles home – gritty, contemporary, innovative and sexy. With a virtuosic and diverse repertory, BODYTRAFFIC paves new roads for the landscape of American dance. DETAILS: BODYTRAFFIC